Headquartered in Ingolstadt, Germany, AUDI AG is a major manufacturer of luxury cars. It’s a 99%-owned subsidiary (as of 2004) of Volkswagen, the largest car manufacturer in Europe. Audi produces more than 960,000 cars per year with renowned models such as the A4, A6, and A8 in its lineup of A-series cars.

Audi was looking for innovative input devices for its Multi Media Interface (MMI). It evaluated touch pad interaction for handwriting recognition, a touch screen, and other input means. The challenge was to bring the new concepts to life as early as possible.

Audi used EB GUIDE Studio to evaluate the concept within user clinics in the USA and China. Test users were able to experience the new interaction concept as part of tests long before they were realized in EB GUIDE Studio.

Dr. Hamberger, responsible for the MMI concept at Audi, sums up the benefits of the solution: “EB GUIDE Studio helped us in a very early phase to bring the new concept to life. This way we had concrete customer feedback to base our decisions on.” 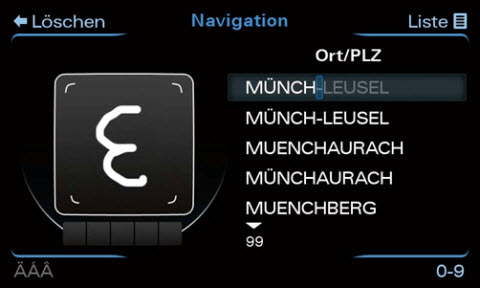 Subscribe to our newsletter(s) and stay up-to-date on the latest products and news!